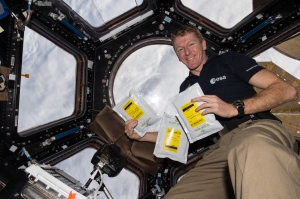 Tozer Seeds have donated 2kg of salad rocket seed to help the RHS and UK Space Agency conduct an experiment with thousands of schools.

In September 2015 2kg of rocket seeds were flown to the International Space Station where they will orbit the Earth until March 2016, when they are due to return with NASA astronaut Scott Kelly.

In April this year, up to 10,000 schools will grow and compare the seeds flown to space with seeds that have stayed on Earth as part of the nationwide experiment.

Visit www.youtube.com/watch?v=7OgSJKqDRFk to see Tim Peake talk about the initiative and inspire schools to sign up.*

Participating schools will receive a teaching pack containing a packet of seeds from space and a packet that have remained on Earth, a booklet outlining the main experiment, a poster to record results, stickers and more.

Following the experiment procedure, pupils will embark on a 35-day voyage of discovery to find out what growing plants in space can teach us about life on Earth and whether we can sustain human life in space in the future. Results will be collected and analysed by biostatisticians and published later in 2016, feeding into the real life work going on in space science research.

Two additional suites of resources (aimed at primary and secondary aged pupils) are available to download from the European Space Education Resource Office UK website to enhance learning around the issues of growing food in space, nutrition and plant mutations.

David Rogers, Sales Director at Tozer Seeds said: “We have been working closely with the RHS on this project forover a year and are all very proud to have our seed pictured on the space station with Tim Peake.  We have a further 2 kg of the same seed securely stored