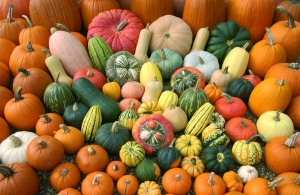 After an absence of five years we have decided to once again host a pumpkin and squash trial in 2014. The trial day which is scheduled for Wednesday 8th October will include over 200 varieties of pumpkin and squash. Sowing has already begun on the different varieties and the company are excited to showcase these at the trial.

David Rogers, UK Sales Director pointed out that this will probably be the largest event of its type ever hosted by a UK seed company.

“The UK acreage of pumpkin and squash has been growing steadily for many years and we considered this the right time to re-assess all of the pumpkin varieties available to us for their suitability for UK production.”

The trial will also include many of our new squash varieties including their latest fast maturing butternuts. Also in attendance and eager to meet some UK growers will be Mark Dellinger, one of the company’s US sales team who has been growing pumpkins on his own farm in Ohio for over 15 years.