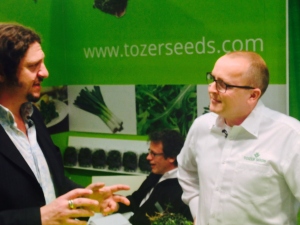 FLOWER SPROUTS STARS IN THE ONE SHOW

We are pleased to announce that Flower Sprout featured in the BBC1 television show The One Show. The One Show is a topical magazine-style daily television programme broadcast on BBC1 in the UK. Filming took place at our stand at Fruit Logistica 2014; British food critic Jay Rayner interviewed David Rogers, Sales Director at Tozer Seeds to discuss the company and in particular Flower Sprout. They discussed why Tozer Seeds was exhibiting at Fruit Logistica, the background of Flower Sprouts, why they developed the new vegetable and how successful it has been so far, Jay also got to taste some Flower Sprout along with other visitors to the stand who were asked to comment on what they thought of this new vegetable that is a cross between a Brussels Sprout and a kale. You can watch the show here: The One Show